I hope that everyone is enjoying this Good Friday, remembering the atoning sacrifice of Jesus on the cross for our sin! As I reflect on this important time of year, I am reminded of the significance and uniqueness of the Christian faith. Especially in light of a recent encounter that I had with Jehovah’s Witnesses.

Over the past year or so, I have had recurring conversations with a few Jehovah’s Witnesses at my door. Honestly, I’m surprised that they keep coming back after I have clearly demonstrated that I believe there are some major problems with their theology according to Scripture. Perhaps it is the kindhearted nature of our interactions and my intentionality in building a respectful relationship with them that they see a chance to break through to me so that I can “learn what the Bible really teaches”?

While neither myself nor the Witnesses had much time to talk during this visit, the woman whom I’ve spoken with the most offered to return soon with a recording of their service celebrating Jesus’ death. I told her that would be fine, thinking primarily of another opportunity to talk with them about Jesus and the Bible. In fact, I may even create a post about my next conversation with them!

Being that “Easter” (Good Friday through Resurrection Sunday) was coming up, they handed me a pamphlet and invited me to their special commemoration of Jesus’ death. 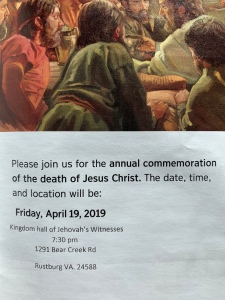 This may come as a surprise to some, but they actually do not believe that Jesus was physically raised to life. They say that the commemoration of the “Last Supper” is the only place that Jesus actually commands us to celebrate something about Himself. And this they say is the celebration of His death because without it, the birth and resurrection (Christmas & Easter) would not be significant. This could make some sense if there was no reason to celebrate the birth and resurrection of Jesus as incredibly significant events in Jesus’ life and ministry as well. It is important to note that they believe in Jesus’ spiritual resurrection, not physical. And they believe that Jesus was not God incarnate through the Virgin Birth.

I would argue that the Last Supper of Jesus with His disciples does point to the significance of His death, but also to how His death in itself is so significant because of His birth and subsequent resurrection. His death would be meaningless if Jesus was only a human being. How would a human being, whom the Bible declares as worthy to be worshipped as God, be able to reconcile our sins, let alone be sinless? Only God is truly perfect and good. His death is also so significant because of the physical resurrection of His body after really dying. And this was only possible by the power of God Himself, proving Jesus’ prophetic claim regarding His body: “Destroy this temple, and I will raise it again in three days” (John 2:19, NIV).

Furthermore, why would it be wrong to celebrate the most pivotal moment of the Christian faith, if it was not literally commanded? The truths that we celebrate about the resurrection of Christ were indeed passed on by Jesus and his disciples; very clearly. That is, that God made atonement for sin in His victory over death, through His humanity and divinity, established in the sinless Son of God, Jesus of Nazareth. And these beliefs, all connected to the reality of a resurrected Christ, are the crux of the Christian faith. Paul wrote:

It is clear that Paul had a firm belief through His own experience, and the corroboration of eyewitness testimony from hundreds, that Jesus’ physical body was alive again. In fact, he boldly asserts that you could simply walk up to them and ask about it! This clearly would have been the very same Jesus that they saw and knew as alive and then crucified. While there were some differences about Jesus, they were only new characteristics; the results of having a “glorified” body that was now imperishable.

Through Jesus’ resurrection, we see the firstfruits of what we who are in Christ can expect at the future resurrection of our own physical bodies to everlasting life. The Bible is clear that we will be raised not just spiritually, but also physically to eternal life with God. And thus, it is an important and joyful reality that Christ was indeed raised to life both spiritually and bodily!

Paul also offers a litmus test for the legitimacy of the whole Christian faith. He says that,

The truth of the matter is that if the resurrection of Jesus Christ’s actual body did not occur, and if the tomb was not empty, then the entirety of the Christian faith and New Testament is meaningless. Wow! What a powerful testimony to the fact that this community of men and women truly believed to have seen the risen Lord, many of whom were willing to die for that truth.

So my question to the skeptic is this: where does the evidence point? Could it be that the mystery surrounding this historical event of Jesus death and the empty tomb, outside of wild and primarily baseless skeptical theories, there is a supernatural reason behind the facts!? Paul’s testimony bears witness to what he and his peers experienced and believed:

“But Christ has indeed been raised from the dead, the firstfruits of those who have fallen asleep” (1 Corinthians 15:20, NIV)

2 thoughts on “The Crux of Christianity” 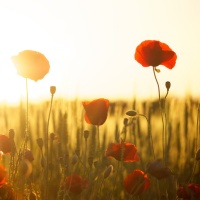 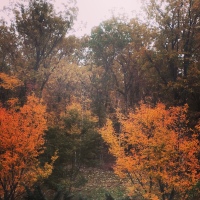